Heavy water is chemically the same as regular (light) water, but with the two hydrogen atoms (as in H2O) replaced with deuterium atoms (hence the symbol D2O). Deuterium is an isotope of hydrogen; it has one extra neutron. Thus the deutrium atom consists of one proton and one neutron in the atomic nucleus and one orbiting electron. It is the extra neutron that makes heavy water "heavy", about 10% heavier in fact.

Heavy water is essential to the operation of Canada's CANDU nuclear power reactors; used as both a moderator and a heat transfer agent. The function of the moderator is to slow down the emitted neutrons, which increases the fission reaction rate, thus enabling a sustained chain reaction. Ordinary water is also a good moderator, but it absorbs neutrons, which is why light water reactors must use enriched fuel. The use of D2O in CANDUs makes it possible to use non-enriched natural uranium. 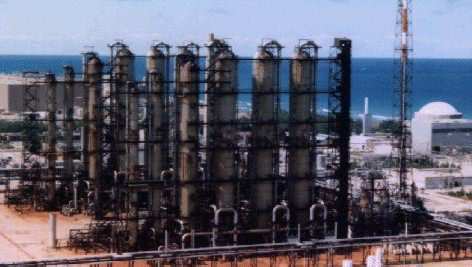 Bruce heavy water plant 'A' (now decommissioned). Bruce NGS B is in the background and Douglas Point is to the right.

Heavy water is produced at Ontario Hydro's heavy water plant 'B' at the Bruce Power Development in Tiverton, Ontario. The heavy water is not manufactured, but rather it is extracted from the quantity that is found naturally in lake water. The water is separated through a series of towers, using hydrogen sulphide as an agent. Owing to AECLs CANDU programme, Canada is the world's supplier of heavy water.

The heavy water for the Sudbury Neutrino Observatory (SNO) is on loan from Atomic Energy of Canada Limited (AECL), and has a value of over $300 million (Cnd). AECL's heavy water stockpile is to supply the moderator for future sale of CANDU stations. Owing to the extreme cleanliness requirements in SNO, the heavy water will come directly from the Bruce plant. This is arranged by an exchange agreement with Ontario hydro.

It is important to note that heavy water is not radioactive, nor is it dangerous to humans or other life unless ingested in in large amounts (it becomes toxic to humans at a level of roughly 10% of their body weight). The deuterium isotope occurs naturally in the ratio 1:4500; thus D2O is found at the level of about 1 in 20 million water molecules.