The Sudbury Neutrino Observatory (SNO) results have provided revolutionary insight into the properties of neutrinos and the core of the sun. The detector, shown in the artist's conception below, was built 6800 feet under ground, in VALE's Creighton mine near Sudbury, Ontario, Canada. SNO was a heavy-water Cherenkov detector designed to detect neutrinos produced by fusion reactions in the sun. It used 1000 tonnes of heavy water loaned from Atomic Energy of Canada Limited (AECL), and contained by a 12 meter diameter acrylic vessel. Neutrinos reacted with the heavy water (D2O) to produce flashes of light called Cherenkov radiation. This light was then detected by an array of 9600 photomultiplier tubes mounted on a geodesic support structure surrounding the heavy water vessel. The detector was immersed in light (normal) water within a 30 meter barrel-shaped cavity (the size of a 10 story building!) excavated from Norite rock. Located in the deepest part of the mine, the overburden of rock shielded the detector from cosmic rays. The detector laboratory, still functioning as part of the new SNOLAB facility, is extremely clean to reduce background signals from radioactive elements present in the mine dust which would otherwise hide the very weak signal from neutrinos. Plans are currently underway to upgrade the SNO detector for the new SNO+ experiment.

The first co-spokesmen for the SNO collaboration when it was established in 1984 were Professor Herb Chen from U California, Irvine and Professor George Ewan, Queenâs University. For interesting accounts of the early development work for the SNO experiment, please see:
"Early Development of the Underground SNO Laboratory in Canada" and "The Funding Campaign for the Sudbury Neutrino Observatory", G.T. Ewan and W.F. Davidson, Physics in Canada, Vol. 61, No. 6 (2005), p. 339-346 and 347-350. (download in PDF format) 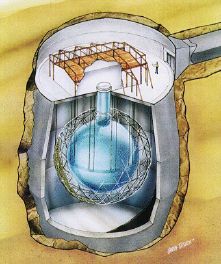 SNO Web Pages on This Site

Also see SNO Milestones for a history of SNO milestones