Contribution to the Sudbury Neutrino Observatory

More Information about the Queen's Group

The SNO detector will be taking data for several more years and the Queen's group will continue to take a leading role in understanding the solar-neutrino data. 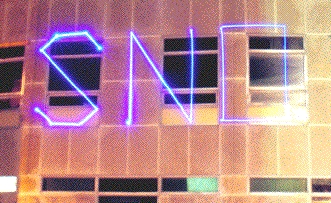 This is a time-elapsed photo (credit: Lorne Erhardt) taken of a blue LED as it was moved by the SNO calibration-source control system. The manipulator, as it is called, is a rope-and-pulley system that can move calibration sources throughout the 12-meter-diameter detector with approximately 5 cm accuracy. This was taken during testing of a full-scale mock-up which was hung over the edge of Stirling Hall, the physics building at Queen's.

Queen's students are intimately involved in the data-taking and analysis efforts and have made major contributions to the collaboration as a whole. The efforts of students has been directed at fundamental issues to SNO: solar neutrino analysis, optical and energy calibration, and water systems development. The key role played by Queen's students has served their education well and they have gone onto prestigious institutions such as Princeton University, Los Alamos National Labs and UCLA. Students who have chosen industrial careers have gone on to JDS Uniphase, TeleSat Canada, Defence Research Establishment Ottawa, and other excellent companies.

Here is a list of Queen's people working in SNO. A full collaboration list is there as well.